Steve Kamb and the Rebellion 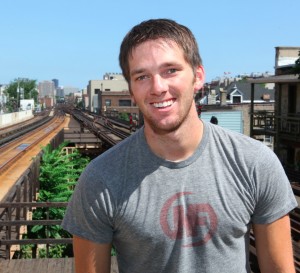 Steve Kamb is a nerd.

How do I know that Steve is a nerd?

Perhaps it is the fact that one of his happiest memories as a child was Christmas morning in 1989 when he was gifted the original Nintendo Entertainment System. Maybe it has something to do with his addiction of the video game The Legend of Zelda. It could be because he was the kid in high school who couldn’t make the basketball team. Or it could potentially be related to Steve being able to reference the movies Star Wars, The Matrix and 300 all within a short conversation I recently had with him.

Pick any of the above, and it is pretty obvious to see that Steve… is a nerd.

I should know, we can sense our own.

However, Steve’s story is one that we can learn a great deal from.

After college Steve was working a sales job that he did not terribly care for, managed to go to the gym (but never really saw any results) and spent a tremendous amount of his free time playing video games.

Then the unthinkable happened. He literally friend the motherboard on his computer from playing too much online gaming. What was worse was that he didn’t have the funds to fix it. But it got Steve thinking. He realized that while he spent all of his time trying to level up the lives of fictional video game characters, he spent little time trying to level up his own life. So he made the decision to set gaming aside and focus on his own life. Instead of achieving experience points in a video game, Steve set out to live real experiences.

He created what he calls his Epic Quest of Awesome which is an ever-growing list of challenges and adventures he sets for himself which has led him all over our beautiful world living out some amazing things.

However something else was congruently happening for Steve. After ditching generic fitness magazines that he never got any results from, he hired a trainer who helped him change his diet and workout routines and Steve saw more results in the new few months than he did in the past few years.

The lightbulb went off.

Steve realized that there was no resource out there for people like him (nerds) to get fit, healthy and live amazing lifestyles. Thus in 2009 Steve launched his website Nerd Fitness.

The idea was simple. To create a resource for people to connect, set challenges for themselves, support one another, share great information and help each other achieve great things in their health and fitness.

For the first nine months the website received cool-to-warm results. He had somewhere around 90 subscribers to his blog. However Steve knew he was onto something bigger because:

1. He loved fitness and being active and

So this had to work somehow. So Steve dug deeper. He evaluated the content he was posting and realized that it was fairly generic – much like what every other fitness website he saw online.

Steve then chose to embrace the NERD in Nerd Fitness. He chose to form a community and looked to the movie Star Wars for inspiration. He asked his audience: are we part of the empire or are we forming a rebellion? There was an overwhelming response in favor of starting a rebellion.

His next blog post was about the rebellion. Here is who we are. We are the desk jockies, the nerds and the underdogs. The ones who were overlooked in high school. And we want to rebel against the way our lives used to be. We want to make changes and live great lives and we want to help each other along the way.

Instead of five generic blog articles a week, Steve wrote two more strategic pieces a week which he made sure to use his voice. Instead of asking people to “subscribe to my blog” Steve labeled it as “Join the Rebellion.” Even the branding was carefully selection. The Nerd Fitness logo harkens back to the Star Wars Rebel Alliance logo in color and shape and style. The Nerd Fitness website has a very comic-book feel to it.

The newly developed content spread and it spread quickly. Today, just a few years later, Steve and the Nerd Fitness Rebellion have more than 32,000 subscribers. Most of Steve’s income now comes through e-books he sells through his website as well as Nerd Fitness merchandise. There is not simply growth, that is exponential growth. Not bad for not ever spending a single dollar on advertising.

And Steve? Steve is the Rebel Leader.

When I asked Steve is the most important piece of advice he could give to those looking to build their own online brand, how to connect with their audience, hand ow to grow their reach through blogging he had two responses:

FIRST… hit publish. People can and often will spend years researching, reading and preparing. Hit publish. Spend the $100 to get a year of hosting and a domain name. Just hit publish and start.

Special thanks to Steve Kamb for the photos and information used for this article.