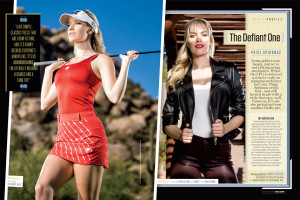 Our team had the exciting opportunity to be a part of the inaugural Golf Magazine Style Issue when we were hired to photograph golfer and model Paige Spiranac. What follows is a detailed account on my approach for this project as well as why making a contingency ended up creating a photo for the magazine.

The shoot began, as many of our projects do, with a detailed discussion with the photo editor (Jesse Reiter) on the publication’s goals with the project and their editorial and creative direction they are hoping to take.

My next step was to compose the team I wanted for the project. This included hiring a stylist for the shoot (Shannon Campbell) who could start pulling clothes immediately for the upcoming project, as well as my in-house team of my production manager and assistant Amber Blom and my hair stylist Amanda Nicole Bland.

From there I arrange a scout to visit the location of the photo shoot, which was the Four Seasons in Scottsdale. Whenever I perform a scout I end up taking a few hundred photos of various areas that jump out at me, including angles and composition I might want to consider – meanwhile sketching out the layout and factoring in potential times and placement of the sun.

After the scout I review my notes and images I took to put together a rough estimate game plan on which areas I want to shoot in and, more specifically, the best times of day I can achieve the shots with where the sun would be in the sky.

I run my shoot concepts and timeline across the magazine photo editor for their input on what they like, dislike or changes they would like to see made. From there I finalize my approach, further sketch out what my plan is for lighting and add in a number of contingencies should anything change.

Day of the shoot we arrived early to unload gear and review our game. The stylist arrived around this time and we were able to go through the various outfits she had pulled for the photo shoot, matching up our favorite outfits with each of the locations we wanted to shoot in – confirming the plan with the on-set editor Jessica Marksbury.

Meanwhile Paige arrived to start hair and makeup and we then headed out to stage the first shot. 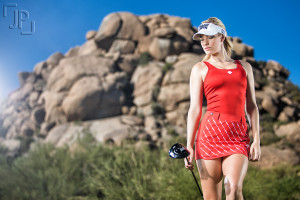 We began the shoot in the mid-morning on the course photographing Paige doing posed shots with her clubs as well as simulated action shots of her driving the ball from the tee box.

The creative goal with this set was to use the gorgeous landscape the surrounding environment offered us as a contrast from Paige and her bold red outfit.

We completed this portion of the photo shoot using 3 lights. Our main light was outfitted with a beauty dish and diffusion sock for specular but still somewhat soft light. Our two other lights were used as rim lights, each at a 45-degree angle behind Paige helping to separate her from the background. 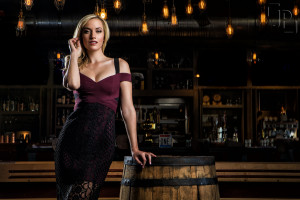 For the second shot of the day we actually went inside and set up a very moody lit scene in the one of the resort’s restaurant bars. The outfit for this shot was a dark maroon and black dress and the bar itself was finished with a variety of wood accents and unique light bulbs hanging from the ceiling giving it a vintage look.

To capture the mood in this scene, I added a grid to my main softbox on Paige and I placed another grid on a hair light behind her camera left. I did not want any other lights in the scene because I wanted the bar to fall dark and dramatic in the background. I had the idea from this lighting from a fashion shoot I did at a wine bar nearly a decade before – coincidentally the last time I had worked with this stylist, so it all came full circle!

In order to show the lights hanging from the ceiling, I actually had to drag the shutter a bit so they would have some time to burn into the image.

Having this set gave me a nice contrast from the first very bright and colorful set we did. 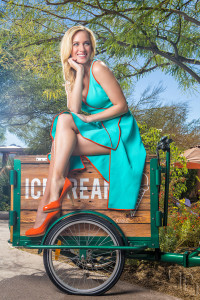 One of the gems I found when scouting the location was this ice cream cart that was retrofitted to fit this tricycle. I had this has something I really wanted to incorporate into a shot at some point. When I saw the turquoise dress with orange trim and matching heels that the stylist brought – I knew it would be the perfect match.

To light this set I used a big softbox without the grid to give big, soft and vibrant light to the scene. I then used two rim lights to help separate Paige from the background. The bright lights and sharp f-stop I used helped capture not only all the detail in the scene – but also allowed for all the colors to become rich and dominant in the image.

My focus here was on balancing all the colors so that nothing pulled away from Paige and her style in the shot. Thus I kept the shots composed tightly so she took up most of the frame.

SHOT 4: ATOP THE WATER FEATURE 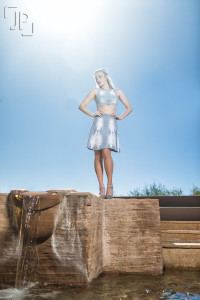 Just past midday I wanted to shoot atop of this water feature. My goal for this shot was to minimize what was in the frame. I used a low angle to hide most of the desert scape in the horizon so that all the focus would be on this dominant foreground of the water feature, with Paige in the middle of the frame and this rich sky behind her with the sun flaring over her shoulder.

I wanted her to look almost statuesque in the frame as if she was part of the water feature. The silver outfit, with unique pattern, helped add to the vibe in the image.

To make this shot work it was important that her posing match the mood and feel of the overall image. Before each set I would discuss with Paige my vision for that set. This is how we could go from moody and sultry in set 2 to bright, cheerful and carefree in set 3, to stoic and sturdy in set 4. Once I communicated my vision I gave Paige the room to pose and move herself, giving direction to make small changes that I would see fit. 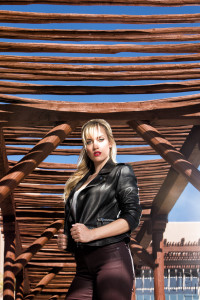 The fourth shot was actually our intended conclusion for the photo shoot and the time when we were supposed to release Paige to the video crew to do her on-camera interview for the web portion of the feature. However, we were just a few minutes ahead of schedule, thanks to everyone who worked quickly and efficiently, and I saw something that I just absolutely had to capture.

Right behind me as I was doing the fourth shot was this semi-shaded walkway made from a pergola-esc configuration tree trunks. I had listed this as a potential contingency location in case one of the other shots did not pan out.

However there was something happening in that moment that I did not see when I did the scout. The sun was shining right through the pergola creating a series of beams of light.

I pleaded with the entire crew on set to allow me 5 quick minutes to make one last picture that they would not regret. I got the green light and moved quickly.

Paige was to wear a white tank top in her video interview. I asked her to grab the black leather jacket the stylist had brought and throw it on.

I positioned her so that the sunlight beam was right over her eyes. I used a beauty dish to fill in the shadows slightly and added in one right light camera right.

After just a few frames I had the shots I loved and set the camera down.

That very shot was one of the ones that made it prominently into the magazine spread.

IN CONCLUSION…
My sincerest thanks goes out to everyone on set and off who helped make this a successful fashion campaign for the first ever Golf Magazine style issue. This shoot was everything I could hope for in a team effort as a creative.