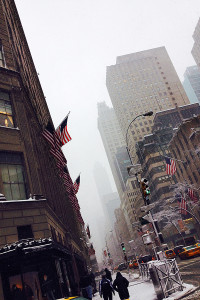 I pulled the knit scarf over my mouth and nose. My glasses were covered with drops of water which was snow only moments before. My shoes were soaked through as I moved through the sleet and slushy sidewalks of Manhattan.

Regardless of how fast I walked, I was pummeled by a never ending down pour of snowflakes.

I arrived at my destination feeling the cold throughout my body – but certainly in my feet which were drenched in icy cold water. I made my way through the building’s security checkpoint and I was standing at the reception desk the receptionist handed me a tissue.

All of the snow which had fallen onto my hair had melted the second I talked into the warm building and now was water drops which beaded and slipped down my face. I laughed and thanked her as I wiped my face dry.

Getting checked in I went through a second security checkpoint and jumped into an elevator heading to the 31st floor.

As the elevator went upwards I shook off as much of the water as I could and took a deep breath.

When the doors opened my mind immediately forgot the wet and cold. I could no longer feel the aches in my feet and legs from run-walking miles in dress shoes. 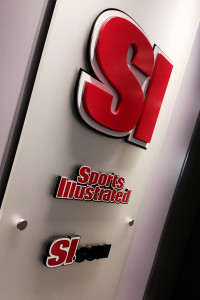 I had arrived to a welcoming brand and logo. The iconic “SI” in bright red letters faced me. I adjusted my backpack, smiled and headed into my meeting with the photo editor.

I was fortunate to catch him between the Super Bowl (which was the day before) and the Sochi Olympics (which he left for the following day).

We shook hands and the portfolio review began.

I had not been in the city for more than 24 hours but I already had several interviews with magazines I sought out to work with and previously only dreamed of being in connection with.

The energy of the city is unlike any other. Despite growing up in Chicago, being a short drive from Phoenix and often working in Los Angeles and Las Vegas – nothing could have prepared me for the intensity and emotion of New York City.

From overhearing three-to-four languages being spoken per city block, to sirens and car horns which lasted around the clock, to the fast-paced hustle of every person racing on foot building to building.

In five days staying near the theater district on Broadway, I met with a variety of publication photo editors face-to-face and planted seeds with a handful more.

During this time there were a bevy of things I learned. Like how to hail a cab in a snow storm and that (despite what some may believe) New York pizza does not even come close to comparing to Chicago thin crust pizza. But I also left New York (sitting in a dark plane as I am writing this) feeling changed.

I first tried to book a New York trip to meet with publications one year prior. But when I did not receive any response from the new phone calls and e-mails I sent out – I decided against attending our of fear.

I assumed that perhaps my work was not good enough for this big city. Perhaps I was not ready yet. Perhaps I never would be.

This year, however, I chose a different approach.

It was the beginning of January and I had already begun my marketing for the upcoming trip to New York back in late November. But as with the last time, the responses were not encouraging – as there were not many.

It was then that I booked an entirely non-refundable trip. This included airfare and a prepaid hotel room. Now, if I permitted fear to take me over, I would be out more than a thousand dollars.

The second thing I did was develop a structured plan – a list of all the companies I wanted to have meetings with, the right contact person, their phone number, their e-mail address, their physical address. Gathering this information took a tremendous amount of time and research.

Then came making contact. Unlike last year where I had only one round of connection that I didn’t get a response to – this time I was far more thorough and persistent.

I began with a phone call (typically being auto-directed to voicemail which I left). From there it was a follow-up e-mail. “Hi, my name is James Patrick and I am an Arizona-based editorial photographer and I will be in town February third through the seventh and would love the opportunity to come to the office to show you some samples of my work, I can be reached at…”

From this approach I received a few replies to say “contact me the week before and we can schedule.” But I did not stop there.

From there I mailed off hard copies of my latest books with a letter. Then it was another round of follow up voicemails and e-mails.

I kept a chart with notes for when I contacted each person and the method I contacted them (was it a phone call, e-mail or both?).

Each week leading up to the trip marked another round of phone calls and e-mails. Understanding the concern of appearing too pushy I made sure to keep all messages short and to the point.

The persistence paid off.

Often, if the editors couldn’t meet – they let me know but asked I stay in touch with them. I also got a few additional meetings set up.

When I got into town I went to each magazine that I had not heard back from yet. I did not ask for a meeting at the front desk (as that would have been too invasive) – but I did leave additional samples of my work and a handwritten letter reminding them that I would be in town that week if they had time to meet. This effort yielded yet another connection.

Then it came to the meetings that I was able to get. Now I’ve had portfolio reviews with editors before, in Arizona, California, etc – but never in New York. I wondered how different it would be. To be honest, it was not much different at all.

The important things I already know were to budget lots of travel time (just in case). New York was hit by, not one but, two snow storms while I was there. A 15 minute cab ride took well over an hour and a half. Fortunately (being neurotic) I had left two hours early.

Study the magazines before meeting. Know why you see yourself working with them. Understand what they’ve been up to. It is impressive to editors when you show you’ve done your homework.

Spend time putting together your portfolio – don’t just throw some photos in a binder. Really thing through each and every image you want to show them and why. I personally have both a print and a digital portfolio (some prefer one over the other, I like to use both). My printed portfolio is a collection of pieces I feel are most viable for the meetings I have. It is diverse enough to show the editors the range of what I can and have done – but short enough that they are not overwhelmed going through it. My digital portfolio includes both new work I have not yet printed (i.e. – “I did this shots last week and really was excited to share them with you”) and also includes a lot of my printed work so editors can see how my work is being presented in the marketplace (magazine spreads, advertisements, etc).

When the editor is going through the book and pauses on a particular piece – it is probably because something there resonated with them. Use that moment to talk about the photo. What was it like on set, how did the project go from a behind-the-scenes perspective, what made the shoot unique?

Ask questions. What does the publication have coming up? Are there any changes in content or style? What does the editor feel are the most successful pieces that they run? What avenues might there be for you to get involved and have the opportunity to prove your work. Talk about things they’ve done recently. You can ask for feedback – what in your book worked for them and what they would like to see. This is not about changing you or your style – but shows your willingness to understand what they are looking for and where you could potentially grow.

Be respectful of time – understand how busy they are. Take your time of course, but don’t linger a single minute past when you need to. Be thankful and appreciative that they took the time to have the meeting.

After the meeting is over – write down how it went, all the details you can remember, making notes. This helps keep it all fresh in your mind so you can refer back to it for future conversations. 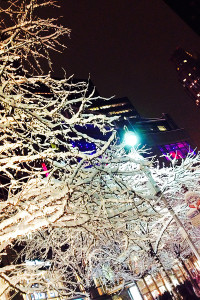 Lastly – you need to believe that you have the right to be there.

Not every magazine is going to want or need you – that’s fine and expected.

But consider and think about all those poeple who (like me a year ago) were scared away from sitting down face-to-face with them or didn’t believe they had the right to be there.

The act of persistence and showing up merits your right to be there.

Be confident in who you are and what you bring to the table that no one else does.

After all, what’s the worst that could happen?