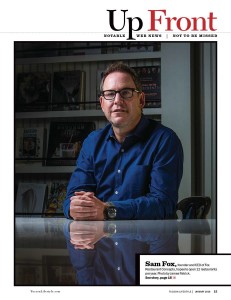 I recently had the opportunity to work with business owner and entrepreneur Sam Fox for an editorial spread in Tucson Lifestyle Magazine. For those outside of Arizona, Mr. Fox owns Fox Restaurant Concepts and is responsible for the launch of such fantastic eateries in Arizona such as North, Blanco, Zin Burger, True Food Kitchen and Olive and Ivy to name a few.

Often times when we are working with a business owner or a professional athlete we may not get a great deal of time to make a lot of pictures.

That is why we plan as much as we can before hand to make sure we maximize every minute we have on set with the subject.

For our shoot with Mr. Fox we were working at his test kitchen in Phoenix. Before the day of the photo shoot I already planned out how I wanted to light my subject using a small deep octa for a soft, rich light with a fast fall off and potentially a backlight with a warming gel on it.

I arrived to the location with my assistant early to scout the test kitchen. We found a large kitchen area with a stainless steel counter top. Behind that was a bookshelf made from white planks of wood. I thought that made a cute backdrop given his profession.

We set up the lights and I began to test the shoot from a few different angles. Originally I planned the shoot with the stove and ranges in the background. However because we had enough time to test I found another set up I really liked using the bookcase as a background slightly out of focus.

By the time Mr. Fox came down for the shoot we had all the lights set up for the two shots, metered and ready to go.

At that point it allowed me the opportunity to connect with the subject, something I like to do before I start snapping away photos. The goal is to help them feel comfortable on set so they can open up on camera.

Once I believed he was ready to go my assistant and I worked quickly shooting the two set ups we had planned out completing the entire project in a little less than 10 minutes and right before Mr. Fox had to head off to his next meeting.

The planning we did before hand as well as the set up and testing prior to him getting to set allowed us to achieve this.