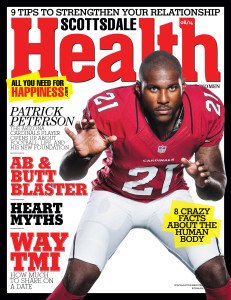 It was about two weeks ago that Arizona Cardinals Cornerback Patrick Peterson signed a contract extension which made him the highest paid corner in the NFL today.

It just so happened to be a coincidence that this occurred on the very same week that my photos of Peterson were published on the cover and interior spread of the new issue of Scottsdale Health Magazine.

Over the past few years my team and I have had the privilege of working with multiple professional athletes including players from the NFL, LPGA, NHL, MLB and NBA.

We’re occasionally asked about how these shoots work from a behind the scenes perspective including the pre-production (storyboarding, planning, logistics, etc) to the shoot itself (how it is run, working with the professional athlete) and then post production. 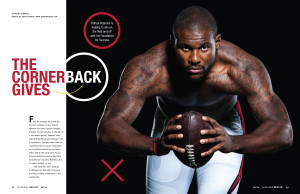 Now each of these photo shoots have been completely unique and working with professional athletes can add a bit complexity as you often don’t have a lot of time but still have a number of different shots to make.

There have been shoots with professional athletes were we had a total of 15 minutes to make enough images for a cover and for an interior spread.

Fortunately with this photo shoot we were given a lot more time – but in either case (and out of respect for the athlete’s time) a lot of planning is done prior to the photo shoot. 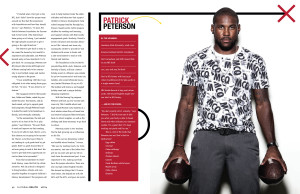 The pre-production began with conversations between myself and the magazine’s Creative Director Anthony Cox.

I’ve enjoyed working alongside Mr. Cox for the better part of five years and have worked on probably 50-60 different magazine covers together for three different publications plus a number of other interior spreads.

Having this history is extremely helpful in the conceptual process as we are able to have extremely productive creative brainstorming sessions. Over the course of a few e-mails and phone chats we swapped ideas back and forth and landed on making three separate types of photos in the time we had. 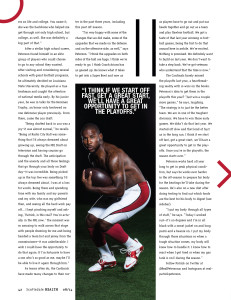 The first was the cover which, to keep with the branding of the magazine, needed to be shot on white seamless.Secondly we wanted him in some action shots for part of the interior spread. Lastly we wanted a casual attire to complete the spread.

We noted a few specific poses and set ups we wanted and I jotted down the lighting styles we needed to do.

It is important to do as much prep work as possible so that no time is wasted on set trying to figure out what to do.

The next step was to find a location to do the photo shoot at. My assistant and I had worked together at this indoor training facility which had a turf field as well as enough space to set up our mobile studio. Being that I had worked there previously – I knew what to expect in regards to setting up lighting.

The day of the shoot we arrived on set early to allow us to set up. I wanted every minute we had with Peterson to be used shooting as opposed to having him wait for us to get ready.

The flow of the shoot was to accommodate what he would be wearing (to prevent him from having to change back and forth between outfits which can take a lot of time). So we structured the shoot in the following order. 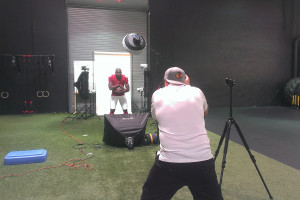 Behind the Scenes James Patrick Photo Shoot with Patrick Peterson

For the studio images I wanted there to be a strong edge light to separate Peterson from the white background as well as to add some dimension to the image.

For lighting we used 4 strobes on the white seamless to keep the light consistent across the backdrop. We then used 2 rim lights with stripboxes to edge light our subject. The main light I wanted a nice specular light so I used a white-lined beauty dish.

On the first shots it was a bit too specular so I added the diffusion sock to give me the effect I wanted. As a fill light, I added a light with a large softbox on the ground under the subject to fill in some of the shadows I did not want. I kept about 1.5 stops between the main light and fill light as I still wanted some shadow and drama coming from the beauty dish.

We ran through a variety of shots including holding the ball, holding the helmet, running towards the camera, in a defensive position and even catching the ball in front of the backdrop. 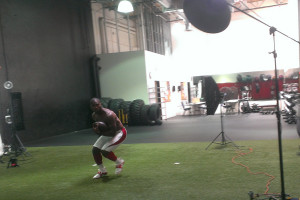 From there we moved to the action shots using the indoor turf. Myself and my assistant quickly shifted the lighting gear. For this we used three lights only.

I wanted the background to fall completely to black and all the light to be focused only on the subject.

I edge lit him with two strobes using the stripboxes and kept the main light as the beauty dish.

We marked the spot he needed to hit for each photo and ran through another few variations of poses and action moves.

After every cluster of images we did I allowed the creative director to see how the shots were coming out – if the lighting was working for him, if there was anything else he wanted added into the shot and so on. 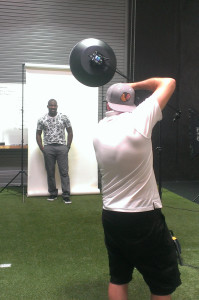 Behind the Scenes James Patrick photo shoot with Patrick Peterson

We then finished the shoot off by having Peterson wear a casual outfit. To make this last portion of the shoot look different, we placed him right against the backdrop and used only a single light (the beauty dish – only this time without the diffusion sock).

The look I wanted was a hard light that would cast a shadow of him against the backdrop. Placing him close to the paper roll and using the single light source achieved this.

We had a few other pose ideas for this final portion of the shoot which included some casual stances with hands in the pockets as well as a few gripping one football and finally a last shot of him holding two footballs – which is the one that ended up going into the magazine. And just like that – the shoot was over in what seemed like a flash.

After the photo shoot came the shortlist. I typically like to give about a day between the shoot and when I shortlist the images to allow myself to approach the shoot with fresh eyes and mind. Every photography approaches this a bit different but I have a two step process.

I first go through all the images and flag whichever images jump out at me as being interesting and worth noticing. After I do that I then take a second pass through only the images I flagged and remove the ones that don’t need to be considered.

I send the final shortlist over to the creative director for him and the rest of the magazine’s staff to make their final selections.

The publication ended up selecting five total shots (a cover, an image for the table of contents page, and three images for the interior spread).

What I feel made this shoot a success was the planning myself and the creative director were able to do leading up to the project, having a reliable assistant who worked quickly on set to minimize downtime between the shots and finally that we had a fantastic subject who was extremely easy to work with and made the shoot a lot of fun.

Hope you enjoyed this behind the scenes feature of the photo shoot as much as I enjoyed piecing it together!