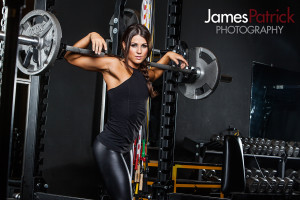 For our October 2013 Feature Talent Interview I decided to profile Mican Bland who I recently had the pleasure of working with. I was greatly moved by the story of her connection with her father, his journey and the campaign she is launching that he inspired. Mican is a great example of someone pushing beyond the restrictive title of “fitness model.”

James Patrick: Let’s start with your background and what got you into the fitness industry
Mican Bland: Well my dad was a bodybuilding and a cyclist and runner so at a young age I would go to the gym with my dad at 5am before school and workout with him. I also stayed active with sports and gymnastics growing up. Then about three years ago I met Felicia Romero and started training with her and got into the competitive fitness world. Also recently I also got into kickboxing as a way to stay fit while I’m off-season from competing.

JP: Can you share with us about Fight IV and how that got started?
MB: The roman numeral of IV is to represent Stage IV cancer, which my father has pushed and fought through. His push has inspired me personally to fight on a daily basis, as that is what he is doing.

He was diagnosed three years ago on October 5th and given six months to live. He has now reached year three. So through his chemo he has continued to fight. I want to take his passion and my passion and really bring out the fight in people and hear other people’s stories and how they are fighting.

You don’t just have Stage IV in cancer – you can have a stage IV in life. It can by physical or emotional. We all end up having to fight at some point in our lives. So Fight IV is an inspiration outlet that will be a lifestyle website and social media channel for people to share their stories and connect with each other.

JP: So what is the next step with Fight IV?
MB: The website should be launching any day now. T-shirts will be available at local nutrition stores throughout Phoenix as well as online. Then we will go out to hear people’s stories and inspire them to fight. It is not just about being fit. That is not the concept. It is about persistently striving to overcome and achieve.

JP: What ways will you be marketing and promoting Fight IV?
MB: Mainly through social media such as Instagram, Twitter, Facebook. The goal is a grassroots word of mouth growth of the movement. The website will be blog based but the channels will be encouraging people to share their stories and how they are fighting. There will be a YouTube channel to feature stories that stand out to us as well as the professional athletes that are involved with us.

JP: How has your father’s journey impacted you not only as an athlete but also as a parent?
MB: He has 7 kids and 28 grand-kids and at 6 feet tall went down to 127 lbs and showed nothing but courage and positivity and strength through it all. So as a parent he has encouraged me to fight no matter what. But also he is one of the most humble people I’ve ever met. He taught me to be my own person so that while I’m raising my two kids I can be a strong parent to them.

JP: Outside of Fight IV, what comes next in your personal journey?
MB: I don’t know whether or not I’ll compete again, that is to be determined. But I want to keep working hard, training hard and being a great parent to my two little girls. Trying to teach them how to be confidence and strong.

The Fight IV Website will soon be live and available at www.fightiv.com

Special thanks to Mican for being a part of this feature and best wishes go out to her father and his continued fight!