Lessons Learned from the Negative Commentary on Maria Kang

Our news feeds and media outlets have been abundant with coverage of fit mom Maria Kang and the controversy surrounding a photo she shared on her Facebook Page which showed her and her three kids with the headline “What’s Your Excuse?”

The post inspired some negative commentary critiquing Kang for being a bully or for shaming mothers who have trouble losing weight. 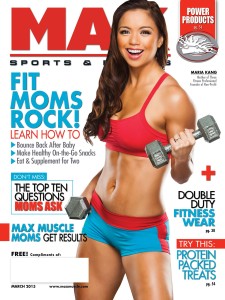 Looking back personally; it was in January of this year that I had the opportunity to meet and work with Maria Kang for a magazine cover and workout feature we were photographing for Max Sports & Fitness Magazine.

My team and I were able to spend a few hours on set with Maria working with her for the photo shoot, but also learning a bit about her story, her goals and her direction with her brand of being proud to be a mom. The caption on her Facebook Page: “Motherhood CAN make you Better!”

Although we were shooting in a cold gym during winter; it was a fast-paced and very high energy photo shoot yielding a numerous fun, emotional and inspirational images that truly resonated with what her brand stands for.

After the photo shoot I remember going through the images with the publication’s Editor and struggling with having too many options for the cover image; which is a great problem to have.

Since that photo shoot earlier this year I’ve watched Maria Kang as she has remained true to what she stands for and represents. In her social media posts, her blog articles and media features; it has been about transparency in being a mom. From the times she has struggles to the times she is at her best; Maria shares it all. The goal being to inspire others; not to shame.

So when the negative commentary began, which then turned into a media frenzy surrounding Maria Kang, I was actually happy to see it. That sounds backwards at first; but please allow me to explain.

“If you’re not upsetting anyone, you’re not changing the status quo.” – Seth Godin

By sparking emotion in people (good or bad) Maria motivated thousands to take action. Yes, a few took to their keyboards to blast some negative commentary, but thousands more retaliated with positive feedback and support.

More importantly; the action that was taken by so many got her message and her brand to spread and spread far. Her Facebook Page is now up to 146,000+ Likes at the date of this post.

This event has increased the platform that Maria Kang has to share her story and her content to help others in their own journey; which has been her goal all along. She has now evangelized a very large community of supporters to work with her and help her continue to distribute her story and brand.

Turning this real life event into a lesson we can take from; when you personally are setting out to do something of your own, your direction and goals will not be for everyone. Nor should they be.

The worst thing you could have is no feedback; or feedback that doesn’t translate (i.e. passive support that never goes beyond that).

This post is not to advocate any attempt to feign a controversy. Instead it is to encourage you to remain true and focused on what you want to achieve and what your goals are. Do not attempt to sanitize or reduce the potential of what you’re trying to achieve out of fear that you may upset some boundaries or have people disagree with you. That is a good way of being ignored altogether.

In the time I’ve known and watched Maria Kang, she has never once wavered from her brand, what she believes in and what she stands for. I’m very excited and anticipatory for what will come next for her in her journey.

I also am interested in hearing from readers on how they used negative commentary to continue to motivate them in their direction as well as being a guide to know they were on the right track. Feel free to comment below or connect with me!