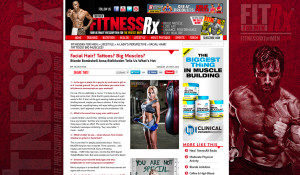 As part of our continued series to follow trends in the publishing industry as well as to share valuable information with talents on how they can market themselves to the media; I had the opportunity to interview Joe Pietaro.

Joe is the Editor in Chief of the FitnessRX For Men Online site and shared with me feedback on transitioning his own career from print to online, how positioning articles differs in the online world from print and how talents can best stand out to be considered for features.

James Patrick: You started your career in the print industry; can you share a little about your background experience both as a writer and an editor?
Joe Pietaro: I began in the mainstream sportswriting industry in 2005. My first gigs were an online weekly sports column and later on as the Director of Media Relations for a local minor league pro ABA basketball team.

I was able to springboard that into a job as the Managing Editor of a monthly print sports magazine, New York Sportscene. Within a year, I was Editor-in-Chief and also did a weekly sports segment on Sirius Satellite Radio.

Approximately three and a half years later, the economy bottomed out and so did the magazine. So I began my own publication that covered two of my passions: sports and fitness. MuscleSport Magazine had a print and online version, a weekly radio show, YouTube channel and website.

James: From there you began freelancing for FitnessRX For Men Magazine and Muscular Development Magazine; how did that come about?
Joe: I began freelancing for FitnessRX For Men and the Muscular Development website through an introduction from Gregg Valentino, who is a columnist at MD. I had interviewed Gregg for a MSM article and we became good friends. He brought me in front of the right people and I was able to get some quality by-lines.

In 2011, I began writing for FLEX and Muscle & Fitness magazines and contributed regularly in FLEX until being hired by FitnessRX.

James: When did the opportunity come up to be hired as the Editor in Chief of FitnessRX For Men Online?
Joe: Again through Gregg, publisher Steve Blechman called me in for an interview in December 2012 for the job. He was familiar with my work already and it was a great match for me, too.

James: What have been your goals and editorial directions with the website?
Joe: I have tried to convey the message that the print version has been doing since 2003, and that we are the definitive source in the industry for cutting-edge research on everything that encompasses fitness. But I have also been very aggressive in bringing in as much of a mainstream audience as possible with the professional athletes and celebrities. Signing Pro Football Hall of Famer Shannon Sharpe as a columnist and spokesperson was very important for me and the company as a whole, as well as having Mario Lopez on the following cover.

James: How has the work varied from working in print to working in online publishing?
Joe: I would have to say that the biggest difference is writing and gathering the material for online with a keyword strategy in mind. Search Engine Optimization is so important in the online publishing world, so the tricky and cool headlines and sub-titles have to take a back seat to the ones that can include the most important words for the Googles of the world to find you.

James: What trends have you noticed within the publishing industry and the development of online medias?
Joe: It changes and updates every day practically. But you have to stay ahead of the curve if you want to survive and thrive. So studying your analytics becomes a daily function first thing in the morning. What worked and where did the views originate from? What was overlooked? What can we do differently today to improve on yesterday’s visits? It’s not as simple as having a great story to tell anymore. You have to now how to get it in front of folks.

James: How can talents best market to the online site to be considered for a feature?
Joe: Service-orientated pieces are the best way to get exposure. So for example a male fitness model has great abs. A short video accompanying an ab training article would be something that I as an online editor would be interested in talking about. Or if someone is a good cook and can give out easy recipes for clean meals. That type of material is always welcome.

James: What are best ways to strength relationships with the brand to be considered for print as well as online features?
Joe: Since the print magazine is published only six times per year, it’s obviously harder to get something in there as opposed to an online feature. We have editorial meetings when mapping out each issue and different story ideas are pitched to the boss. He is the ultimate decision maker with all editorial for the print.

James: What things can we expect to see coming up for FitnessRX For Men Online?
Joe: Where do I start? Well, we are premiering a brand new FitnessRX Radio show every Monday from 8 to 9 PM. Gregg Valentino and I will be co-hosting and we will have two guests on each show. This begins on October 7 and it can be heard live or via a free iTunes download.

We ran our “Man of the Summer” contest recently and gave away a prize package of fitness products worth over $500. The winner appeared in our print magazine and had an online feature article. “Man of the Fall” is coming up real soon.

Another new edition to our website is “The Kristal Diaries,” where IFBB bikini pro Kristal Martin will write a sex advice column.

Our forum community has been growing, as well. Kristal has her own section where our readers can ask her questions. Gregg also has his own forum area and we are running a weekly NFL pool. At the end of the season, the members with the top three amount of wins will get free prizes.

And, of course, all of the training and nutrition material that our readers have come to expect will be prevalent. Our social media ‘Tips of the Day’ have become a huge success and we get to interact with the readers there all the time.

Special thanks goes out to Joe Pietaro for taking the time to be a part of this feature. Check out the latest projects he is working on at www.fitnessrxformen.com