Important Lessons from a Meathead

Earlier this week I was very excited to have my fourth cover with Australian Iron Man come out (second this year) and the first featuring a good friend and colleague I’ve worked with now for several years.

Since the magazine’s release to the social media sphere I’ve received a few friend requests on Facebook from men’s physique and body building talents throughout the world. For the most part – I don’t think too much when it comes to accepting or denying friend requests. Looks like we are in the same industry? Accept.

Yesterday I accepted one and something very awkward then transpired. Within a minute of accepting his friend request he posting a comment on my profile wall soliciting me and all my friends to go like his page so he can increase the number of likes he has. I was stunned at the boldness of doing this and immediately felt used for accepting the friend request.

I am just another number for him. Gee, thanks buddy.

I deleted the post and immediately sent him a message “Seriously? Don’t immediately spam my profile once I accept your friend request.”

What happened next however, is something I feel we can all truly learn from.

To support my push for full disclosure I have screen captured the entire presentation for you. 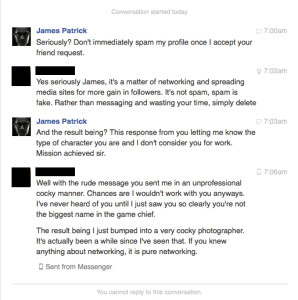 I did redact his name and his profile photo for two reasons.
1. I don’t use my blogging platform to attempt to hurt or mar others. It is intended to share information – and believe it or not, we can learn a thing or two from this meathead.
2. Come on, someone has to protect this guy from how stupid he is.

Let’s break down his responses bit by bit and pull the lessons we can from them.

First – what is spam?
According to Wikipedia, Spam is the use of electronic messaging systems (ie Facebook) to send unsolicited bulk messages. I would say that posting an advertisement on someone’s profile for them and all their friends to go LIKE your page without ever having a conversation or asking permission would fall under the category of unsolicited. Bulk means in quantity. I would bet that this is something he has done on a regular basis.

What would have been a better approach? A message introducing yourself. “Hey – glad to connect, here is who I am and what I do. Thank you for accepting – hope we can stay in connection.” And if you wanted to promote your page to grow your followers – say just that. “I am looking to extend my reach and feel that your audience would benefit from what I share on my page because…” You have to demonstrate what is in it for the end user. Same with pitching to a magazine. What is in it for the audience.

Permission is one of the most crucial assets we still have in this digital world. Gaining permission from people to share is worth a tremendous amount. May I send you my blog? My I add you to my group? And so on.

Second – what is networking?
I’ve written numerous times on the value of true networking outside of the digital platforms. All the LIKES in the world do not always translate into real connections, relationships or business.

The true development of business relationships involve four things.
1. Spend the time to get to know the other party and what they need.
2. Demonstrate your value in relation to what they need.
3. Don’t just deliver – super deliver on services and quality.
4. Stay in touch to continue to cultivate and grow that relationship.

Spending time and energy to simply achieve “more gain in followers” only inflates one metric – ego.

Third – know when to apologize.
A year ago I connected with an Art Director for a magazine I wanted to work with on Facebook. After a few months I finally sent him a message introducing myself and indicating that I would be interested in sharing work samples with him. The response was very blunt that he does not use his profile for his job and that I needed to connect with him through another platform (he gave me the information on how to do so). He was not rude or mad – but he was very straight forward. He wanted his profile to be personal only. In this situation – I made the error. My response was two fold. First and foremost was an apology as I did not realize his intent with his profile (this falls under the first part of building a great business relationship). Second was my thanks and appreciation for being pointed in the right direction. Flash forward to today – we now have a great relationship and are beginning to work together. Do you think that would have happened if I had not apologized for my error?

Mr. Meathead (clearly making one error after the next in his life) decided instead to snap back with “rather than messaging and wasting your time simply delete.”

Apparently his version of “networking” does not involve people actually talking to one another.

Needless to say – that one comment pissed me off even further (beyond being spammed) and I made sure to let him know that. Then he bit back.

He accused me of being cocky in my response… probably 37-49% accurate.

Then he said he probably wouldn’t work with me anyway… 100% accurate as (when I looked backed) he actually tried to book me a year ago but felt I should provide him free services. I declined then.

After that he said he never heard of me before… I got a bit sad as I guess I didn’t leave a significant impression a year ago.

Then he said “Clearly you’re not the biggest name in the game chief.” – Clearly, very accurate! Although I am not sure which game we are playing?

Finally he wrapped it up with “If you knew anything about networking, it is pure networking.” I’ve tried real hard to figure out what he meant by this. However I still cannot pull any real meaning out of this.

But I should certainly be taking networking advice from a spammer who does not believe in conversations with his audience and admitting when they fouled.

Then Mr. Meathead made the best decision of the day. He blocked me on Facebook so he could ensure he got the final word in. Mission achieved sir!