Behind the Scenes with Arizona Coyotes’ Oliver Ekman-Larsson 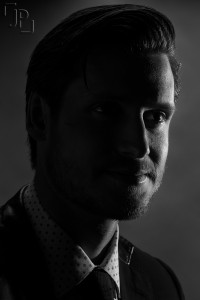 Recently had the opportunity to meet and work with Arizona Coyotes’ star defenseman and NHL All-star Oliver Ekman-Larsson for a cover and spread in a recent issue of Scottsdale Health Magazine.

The creative direction of the shoot was originally scripted to be a blending of men’s fashion with an athletic setting. Before the photo shoot – the publications Art Director and I chatted about various concepts, ideas and themes we wanted to explore during the photo shoot.

We centered on having Ekman-Larsson wearing a suit while on the ice with his stick skating around. The creative approach also included the use of colored gel lighting to further push the visual styling of the shoot.

Myself, my assistant and production manager arrived on set to meet the Art Director about an hour before shoot time. This would give us the opportunity to stage and set up all of our shots long before Ekman-Larsson arrived on set.

We began by staging two sets of lights. The first set was for our cover shoot, which was being done in an auxiliary locker room just off the ice. 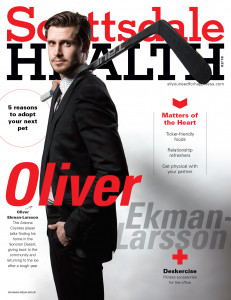 The second was a series of lights we planned to take out onto the ice for the interior spread portion of the photo shoot.

However, after we got everything set up, including the studio and all the gear we were about to take out on the ice – we found out that the ice was no longer available due to a scheduling conflict.

As this was the main angle of our creative approach, the Art Director and myself were forced to think quickly to revise our shot list.

I came up with the concept of using some dramatic lighting while we had Ekman-Larsson in the suit. I varied the shots to include some low-lit portraits and some moody three-quarter length and full body length fashion images.

From there we shifted the lighting to a high key lighting set up using a single hard light source throwing a high contrast shadow against the backdrop. We had Ekman-Larsson switch to a move casual outfit and shifted around the posing to a more relaxed and casual stance versus the more sophisticated and serious poses we did in the formal look.

The shoot ended up being a success, despite losing the main ingredient to our creative approach! 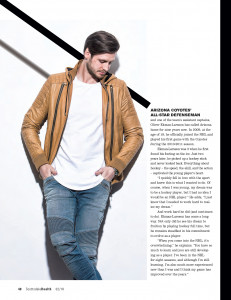 That is the benefit of hiring our team for projects. After 15 years of photography we have come across it all and can think quickly, adapt and make changes quickly to make sure even through obstacles that our projects end in a success!

Author’s Note: If you enjoyed this article or found it helpful – please share it with a friend or colleague. Also, please contact me when you are ready to level up your professional photography, graphic design or video needs!