Behind the Scenes on the Elements Fashion Shoot 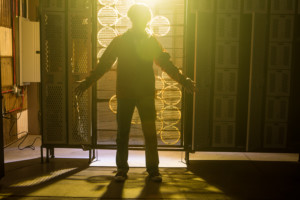 I’ve known fellow photographer Tom Spitz for the better part of a decade. Early in my career I actually would assist Tom on a handful of his photo shoots, gleaning all I could from his work. When the idea was proposed for us to shoot together I simply could not resist.

Both of us wanted a passion project that was outside of the work we normally get hired to shoot. Something were we could push ourselves creating and try new concepts and approaches that we never had before.

After a handful of lunches we came up with the concept of theming the photo shoot the four elements; earth, wind, fire, water. Each of us would take two of the elements and the unifying features would be that we would both use different colored gels in our shots. Tom took water and earth and I took fire and wind.

Tom found a great location called Whistle Stop Depot in Tucson that was diverse enough for he and I to spend the entire day shooting in. 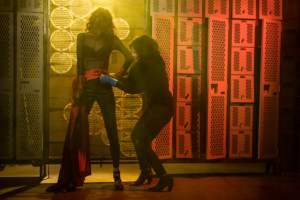 Prior to the photo shoot we pulled dozens of swatches and samples for lighting we wanted to try or posing we wanted to consider. We also toured the location twice to do as much pre-planning as we could.

We decided to hire stylist Monica Negri to help style all the models for the photo shoot and give it that finished touch. We also hired professional makeup artist and hair stylist Amanda Bland to make each model look their best prior to going on camera.

Ford/Robert Black Agency sent over three of the four models and we were able to get a fourth who was a former Miss Arizona winner.

The morning of the photo shoot we arrived early for a final game plan. We bracketed the models to arrive throughout the day to be respectful of their time. Tom and I were to go back and forth in our shoots.

While I was shooting he was watching my images as they came onto the computer screen offering advice and input and to push me to try something new and different. Then when he was shooting I would do the same for him.

The order of the shoot was:

What follows are my two approaches for the Fire and Wind photos. 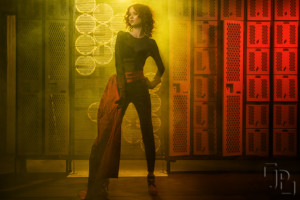 Beginning with fire we had the model Tori Rose. She was styled in an edgy and dramatic outfit that complimented the theme of the shoot. I found these metal grates with both lockers and gears welded to it.

Our approach was to build one single light at a time.

We started with on rim light with a strong yellow gel on it. We positioned it on a c-stand behind the metal grates so that it would shine through the material and placed it behind and above her head.

The second light was with a red gel positioned camera right and shooting towards the lockers to create a second color giving the illusion of fire.

The main light we started with a large octabox; but it was too difficult to get light on the subject without killing the colored lights behind her. Thus we instead went with a softbox with eggcrates attached so the light was soft but focused just on her face and upper body. This prevented light from spilling out and eliminating the gel lights.

The final element was to add two smoke machines to billow around her and catch the colored gel lights.

We took a large number of shots to get the right mix of smoke and gel lights. 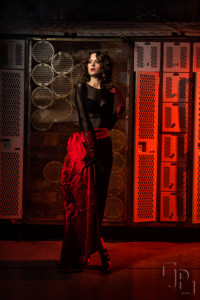 One of the happy accidents we had was when the yellow gel light didn’t fire and we got another options with just a strong red backlight and a soft main light.

For the wind photo shoot we wanted to illustrate some motion and the element of air. The location had two airplane sides welded in as doors. I chose that as the backdrop as the sides of the plane played well with the wind theme.

Our model, Piper Kelly, was outfitted with a soft pink dress that puffed out around the hips. The color of the dress helped to contrast her from the scene.

I put two light heads outside the doors one with a light blue gel and one with a purple gel – two colors I thought complimented the idea of a windy day.

We used the smoke machine again, but with much less intensity compared to the fire shoot. We fanned it out behind the model so that it would capture the streaks of lights pouring in from the doors behind the model.

The main light was a large softbox, which complimented the subject nicely. The final element was to have a small fan blowing her hair to the side. 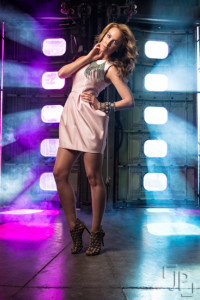 We posed her at a strong angle to illustrate a bit of movement reinforcing the wind theme.

Postproduction on each image involved minor skin edits and using the curves palette to burn and dodge areas of the images. The wind image took a bit more time as we pulled in the streaks of light and the blowing hair from another photo to match the pose we wanted to have.

Stay tuned as I will share Tom’s details of his portion of the shoot when he posts them.