Behind the Scenes on a Spring Fashion Spread 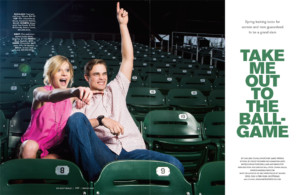 The James Patrick Photography team recently was booked to photograph an editorial fashion spread for both So Scottsdale Magazine and their sister publication Uptown Magazine. The theme of the photo shoot was “take me out to the ballgame” to promote both spring fashions as well as spring training baseball in Arizona.

After being hired for the project, and before the photo shoot, I took a tour our photo shoot location, Salt River Fields – home to both the Arizona Diamondbacks and the Colorado Rockies spring training facilities.

Using scout photos I took at the facility, I prepped a creative approach for the fashion shoot. I started by focusing on the big picture of how I envisioned the spread looking. I made notes on the specific locations I wanted to shoot at as well as how I felt the lighting should be. I planned on doing every shot outside, leveraging the bright Arizona sun as much as possible, striving to have bold and vibrant colors whenever possible.

The magazine’s Creative Director and myself conferred on the notes and approach, making tweaks and changes where necessary as well as referring to sample magazine features and advertisements that resonated with us for additional ideas and inspirations.

The goal of the discussion was to develop a shotlist for the full spread including at least one alternative concept should we have time at the photo shoot. 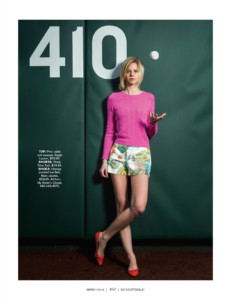 The day of the photo shoot introduced a pretty sever new variable. The sunny skies and bright sun we hoped for were replaced by a very rare cold, cloudy and drizzly day. We knew this in advance prior to going into the shoot and both the Creative Director and I agreed we would adjust our approach as needed to make the shoot happen on the scheduled date. We just did not expect it to be as cold, as windy and as drizzly as it ended up being.

The morning of the shoot, myself and my assistant met with the Creative Director and stylists early while the talent were in hair and makeup to select the specific outfits to go with each of the areas we were shooting at. We had to quickly revise our shot list and the timing of shots to accommodate when we felt there would be sun or when it was forecasted it would rain.

Then it came to actually doing the photo shoot. Since we had no visible clear sky, I changed the approach to feel a bit moodier. I darkened the shots to show the clouds, which complimented the model’s posing. 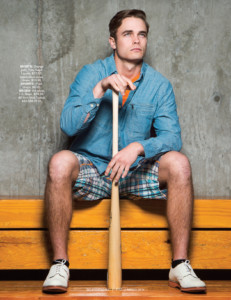 When it came to posing, the Creative Director and I did not want the talents addressing the camera too much so we kept their posing to feel as if they either playing in a spring training game or they were enjoying it from the stands.

Before each set we would show the talents examples of poses to try then allowed the talents to work the scene while offering direction when needed.

Because we had successfully planned the shoot before hand and had made all improvises quickly, we were able to not only get in an extra outfit change for one of the talents – but were also able to dedicate additional time to a final shot which ended up running as the opener of the spread.

After the photo shoot, the models’ work was done – however the rest of the team was not near finished.

It started with me shortlisting the images. On my initial pass of the thousand or more images I shot yielded a shortlist of around 350 options. I took a day to look at it again with fresh eyes where I was able to whittle it down to between 50-and-70 options that I could share with the Creative Director and the rest of the editorial staff. From this shortlist they selected around 10 images they wanted edited for the spread.

My postproduction efforts for these shots concentrated on bumping up the color and giving the skin rich contrast. There was a bit of editing work required on some of the outfits to make them look better for the publication. 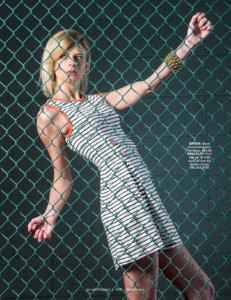 After post production the project was then on the shoulders of the Creative Director to piece together the spread which included a double truck opener plus six other full page images for a total of 7 images being used on 8 pages.

Some photos were omitted because the style was too distant from the cohesive theme and style of the set. It was important that the final spread look and feel like a unison piece. Other images were omitted due to lack of space.

In reflection, although we only work on a few fashion spreads a year, it is something we enjoy for its creative challenge and opportunity to test new styles and approaches to our photography work.