Behind the Scenes of a Fashion Photo Shoot 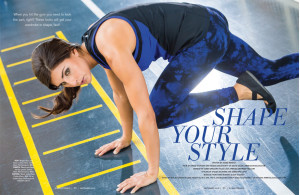 Our team recently had the opportunity to photograph an editorial fashion spread for So Scottsdale! Magazine. The theme of the shoot was workout apparel so we made a creative “fit” for the photo shoot – pardon the pun.

The work for the full day shoot actually began a few weeks before the project date. After being assigned the campaign I did an initial creative planning session by myself. During this I focused on the big picture of how I wanted the spread to look and feel. I made notes on the type of lighting I wanted as well as the post production look the magazine’s Art Director hoped to see. I went through my collection of swatches (which are samples I tear out from magazines or advertisements) for additional inspirations and ideas. The next step was to do a site visit of the photo shoot location. 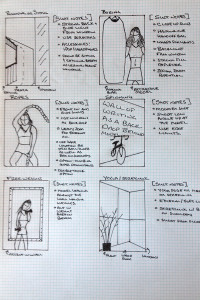 The Art Director and I made to review the sponsor location which involved checking out each of the potential shoot areas, taking test shots and checking light readings based upon the time of day. The Art Director and I then sat down over a quick bite to eat to shortlist the ideas to the best ones for the 8-page spread including not one, but two, alternative concepts should something not work out.

I went home to finish the storyboard and sketched out concepts related to specific areas of the location making notes of both poses and lighting for each set up we were going to be doing.

A few e-mails were exchanged with the Art Director and myself to firm up details. Meanwhile the Art Director was busy booking the talent from their agency and the magazine’s stylists were pulling a variety of clothing options from numerous retail sponsors.

The morning of the shoot, myself and my assistant met with the Art Director and stylists early while the talent were in hair and makeup to select the specific outfits to go with each of the areas we were shooting at. We discussed with the hair and makeup team the look and feel we wanted the models to have as well. 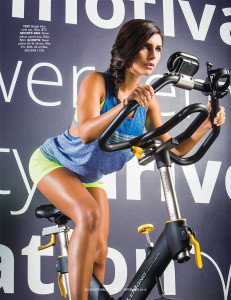 Then it came to actually doing the photo shoot, after a significant amount of prep work. Creatively for the shoot I wanted to use as much color and natural light as possible. Unfortunately a big storm came in during the first shot we were doing which killed all of our natural light coming in through the windows. We had to improvise quickly and began using large light modifiers such as large softboxes, octaboxes, a large 5×5 shiny board as well as a strong backlight flaring into the lens to give the shots as much light and vibrancy as possible – oftentimes attempting to mimic natural light by using artificial light.

When it came to posing, the Art Director and I did not want the talents addressing the camera so we kept their posing to feel as if they were in motion or some form of action in a majority of the shots. Before each set we would show the talents examples of poses to try then allowed the talents to work the scene while offering direction when needed. 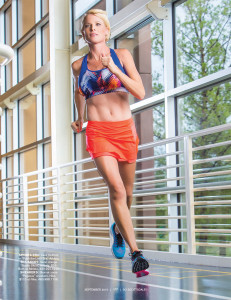 Because we had successfully planned the shoot before hand, we found ourselves running 2 hours ahead of schedule near the end of the day. This extra time permitted us to review the entire shoot to see any weak points. During this review we decided to shoot one of our alternative concepts in addition to what we had already done. Why excuse everyone when there is still ample time on the clock to work to make a better picture?

Taking the opportunity to work on this contingency shot worked to our benefit as it was one of the shots that appeared in the final spread.

After the photo shoot, the models’ work was done – however the rest of the team was not near finished.

It started with me shortlisting the images. On my initial pass of the thousand or more images I shot yielded a shortlist of around 350 options. I took a day to look at it again with fresh eyes where I was able to whittle it down to between 50-and-70 options that I could share with the Art Director and the rest of the editorial staff. From this shortlist they selected the 10 images they wanted edited for the spread. 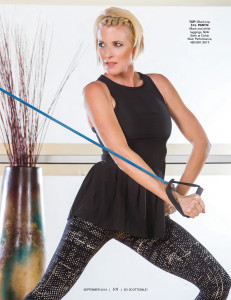 My post production efforts for these shots concentrated on bumping up the contrast, color and giving the skin a smooth gloss-like finish which was requested by the publication.

After post production the project was then on the shoulders of the Art Director to piece together the spread which included a double truck opener plus six other full page images for a total of 7 images being used on 8 pages.

Some photos were omitted because the style was too distant from the cohesive theme and style of the set. It was important that the final spread look and feel like a unison piece. Other images were omitted due to lack of space.

In reflection, although we only work on a few fashion spreads a year, it is something we enjoy for its creative challenge and opportunity to test new styles and approaches to our photography work.

See the rest of the shoot at our Facebook Page.