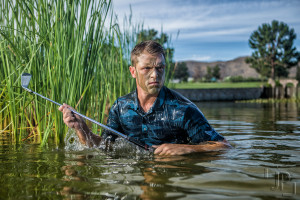 Back in may I received a message from the photo editor at Golf Magazine, Jesse Reiter, with an idea for a conceptual shoot for an upcoming issue of the publication.

The vision was to blend together a golfer with a Navy Seal. Think of a Navy Seal slowly coming up out of the water, only it was a golfer emerging to stalk his perfect shot. I personally love the opportunity to do conceptual projects so I jumped immediately at the photo shoot.

PHASE I: PRE-PRODUCTION
Working with Jesse remotely I headed out to our location, The Raven Golf Course in Phoenix, to scout areas we could shoot in. I found a hole right near the club house that was bordered by a small pond that worked perfect for our needs.

During this, we collaborated with the course to get a subject, Jim Waldron. He is a long drive competitor, but looked the part of the Navy Seal-esc golfer.

My production manager on the project, Amber Blom, sourced the camouflage golf shirt and visor.

I also quickly hired a makeup artist, Amanda Bland, and sent her samples I found online of military grease paint designs I liked.

All this we got done in about a week’s time.

PHASE II: PRODUCTION DAY
We held the shoot shortly after sunrise on the morning of June 1, which meant I had to get up far before the sunrise to drive the 100 miles to Phoenix to make sure I was on set at time.

My onsite stylist, Nicole Matthews, sorted through the outfit options we had purchased to see what worked best with the location and the subject.

The makeup artist styled the grease paint. The idea was to make it visible and interesting, but not cover up too much of his face that it was a distraction.

We then set up the lighting for the shoot. Our main light was a white lined beauty dish with a diffusion sock attached. It was connected to a C-Stand so we could angle it over the pond slightly. I then used a rim light behind the subject (and the reeds behind him) to offer some backlight (coming from the same direction the sun was but a little stronger). I also put another light way across the lake to add the slightest bit of rim light to the subject’s left side.

I shot the project with a Canon 5D Mark IV and a 24-70 L Series lens. I did not use a telephoto lens because I did not want to lose too much detail around and behind the subject. You’ll notice I placed the green just over his left shoulder.

Originally I tried getting the shot by hanging over the concrete ledge of the pond but struggled getting the camera low enough to capture the right power-angle. Not to mention I was giving myself a nice bruise across my chest.

Thus I jumped into the murky pond. I felt bad until I realized that Jim, our subject, was up to his neck in the water.

I crouched low myself with the camera maybe 2-3 inches above the waterline. I had Jim pop up with his club in hand and worked to capture the water dripping off of him as he came up out of the water.

We were not getting enough motion in the water, so I had Nicole stand to my right and agitate the water with her leg as I was shooting so we had some nice ripples in the water.

I then added an ND filter to my lens. This served a few benefits. First it made the colors a bit richer and bolder, one of my favorite things about the ND filter. Second, it slightly blurred out the environment, but not too much so we could still tell what everything was, but now the focus was more on the subject.

After a few hours swimming in algae we had the shot we knew we loved!

PHASE III: POST-PRODUCTION
Editing on this project was actually quite simple. I shortlisted four images that I knew could work and performed a quick edit to then. However there was the one image that I knew I loved the most. I spent a bit more time on this one to get it production ready.

The image was color balanced and sharpened in Camera Raw. I adjusted the exposure, contrast and clarity levels until I was happy with how the image popped to the eye. Once I got the image into photo shop my work was pretty minimal. I removed some power lines from the skyline and made the eyes a bit brighter. I performed one last sharpening of the file and then was happy to send it off to the magazine.

RESULT
I was thrilled to see Golf ended up using my top choice as their double-truck spread in their most recent issue. Special thanks to everyone who played a part in making this photo shoot a success!