A mile by mile journey to the finish line 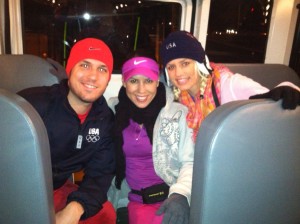 James Patrick, Kim Miller and Shannon Dougherty on the bus heading to the race

I’m sitting in my office sipping my hot coffee. Not because I need to wake up, but more so I am trying to warm up. You see, I have an ice pack wrapped around my left knee, I have one under my right thigh and one resting underneath my right foot.

Just 24-hours prior to writing this I was standing at the starting line of my first ever half marathon race. It was the culmination of a few months of training and the encouragement of close friends and colleagues.

At the starting line with me were my friends Kimberly Miller and Shannon Dougherty. Our day started early. 3:30 in the morning early. We had to shovel some protein and carbs into our bodies as our eyes slowly opened with some caffeine. From there it was getting on a bus at 5 in the morning in the cold temperatures before the sunrise. We go to the race location around 5:30 and now had an hour and a half to freeze in the dark before the race began.

The pre-race activities involved rushing back and forth between going to the bathroom and huddling around a heating lamp. Then, the next thing I knew, I was walking up with a group to start our half marathon. Herein is the mile-by-mile recollection from my race.

STARTING LINE: I heard someone that I don’t see yell “GO!” and we took off. A massive herd of runners darted off in the pre-sun hours of the morning. Within mere seconds both Kim and Shannon had disappeared in the distance having massively greater levels of speed than myself. In fact, many of those around me were no strangers to running these types of races.

1. I forced myself to maintain my pace and keep my focus as a few waves of runners cruised past me. Although I have held my own in short distances, long distance running has never been a strong forte of mine and despite my training I knew I had to maintain a speed I knew I could sustain.

2. By mile marker 2 I was starting to feel my body warm up. I laughed slightly as I heard one runner say to the next “I can’t wait to start sweating!” as we all were anxious for the sun and accompanying warmth to come up.

3. I hit mile marker 3 and was beginning to feel my runner’s high. I was able to increase my speed, although cautiously as I was in fear of burning out. The sun began to rise over the mountains to my left. I took a few moments to glance in that direction as I found my running Zen.

4. Wherein the first two miles I was being passed, it was now my time to start passing. My adrenaline was on high as I maintained a quality pace past several groups of runners.

5. As I passed the 5th mile marker, I was surprised at how I felt no fatigue. In hindsight I attribute this to the rushes of adrenaline I was getting in my body between the third and fifth miles.

6. Passing the 6th mile marker I began to feel soreness in my feet. Both of my feet, but primarily my right foot began to tingle from a slight swelling. I slowed my pace drastically to compensate and hoped the swelling would subside.

7. When I reached the 7th mile marker I chose to stop for the first time and use the restroom. I walked away from the rest station still feeling the pain in my feet, which was now slightly creeping up into my calf muscles. After one minute of walking I picked up a slow jogging pace.

8. I was stunned that by the time I was nearing the 8th mile marker that I had to go to the rest room again. I’m not a germaphobe, but I was concerned that the porta-potty had no hand sanitizer in it. I was quickly off to the next marker.

9. Fortunately I made my way to the next mile marker, now in fairly cramped pain to find a restroom station with hand sanitizer. Although I was hesitant to share such an odd detail; I noticed most runners are very blunt about what happens to their body when they go through a race. Needless to say, I fortunately I made it. However after this station I was feeling the fatigue throughout both of my legs. My feet were no longer tingling as they were just aching. I began to switch between one minute walks and four-to-five minute runs. I injested some of the runner’s gel I had in my pocket in hopes it would give me a little fuel to burn off.

10. I continued by alternating of walk-to-runs. Each time I either slowed down or sped up I would feel shock waves of pain shoot up from my feet, through my legs and into my hips. The downward sloped course was beginning to take a slight toll on my knees.

11. I hit the 11th mile marker near exhaustion. I was slightly confused as when I passed this mile marker there was a group of on-lookers who were cheering, only one more mile! I didn’t notice a sign so I took their word for it. In the excitement I felt a second wave of adrenaline as I picked up my speed. They were wrong.

12. I picked up my pace early thinking I would be finishing near this point only to find out the group of on-lookers was incorrect in their estimation of how much distance I still had in front of me. As I passed the 12th mile marker I slowed to a fast paced walk for a minute. Each step my legs felt a slight wobble. I turned one last corner of the track to see the 13th mile marker in the distance. I exhaled, put my head down and picked up pace yet again.

13. As I came down the final stretch I pushed each leg in front trying to muster up any amount of speed I could. Truthfully I was primarily focused on making sure my feet got off the ground and did not drag thus tripping me. There was a crowd of people on both sides of the track. Yelling, shouting, clapping, cheering.

13.1. The final tenth of a mile I made a turn into a dirt portion of track, a finish line was just feet away from me. As I approached it I heard an announcer say “James Patrick coming to the finish.” Then I crossed.

I wobbled my way past the finish, received my medal and heard my mom call out my name. She had driven out to the race to see me cross the finish line. I worked my way around the barricade to hug her, in which I just leaned on her so as not to fall over! I hugged Shannon and Kim who had both gotten to the finish line much earlier than I.

Then I quickly (and by quickly I do not mean “fast” but as direct and rushed as I could) made my way over to a food tent to gobble down a few bottles of water, bananas and peanut butter and jelly rolls.

I found a spot in the grass and collapsed. Both of my legs trembled and I couldn’t seem to get the food in fast enough. After a few moments I caught my breath and began stretching out my muscles. I took a deep breath of air and realized that despite the pain and the exhaustion that I felt wonderful.

Since that moment I’ve spent most of my time reflecting on crossing that finish line and how it compared to my first big fitness goal I set earlier in 2012 to be in a men’s physique competition.

Although both involved a significant investment of time, energy and dedication – there was something uniquely different about running the half marathon. When I crossed that finish line I was clocked at a specific time (albeit not a great one compared to those who have run a lot). However, I now have a metric, a yard stick for what I accomplished. There was no feeling of subjectivity or being under/overvalued.

I was solely responsible for the outcome at the end of the race.

Every single step I took, whether I was walking, jogging or running, got me to that finish line.