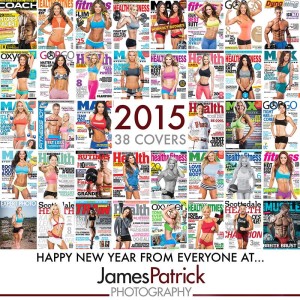 A lot can happen in five years. Entire industries can evolve, change, shift, rotate, adapt. Myself personally I managed to buy a house, make friends, lose other friends, leave my corporate job, launch my own business, launch a few other businesses, close some businesses, write a few e-books, host a few events, the list goes on. Yet since the beginning of 2011 I have had the opportunity to work with Max Sports & Fitness Magazine on 45 of their cover assignments and nearly countless interior features.

As the magazine celebrates the publishing of their 200th issue, I could not help but to reflect on the quarter of their cover assignments I worked on for them.

My first cover with the magazine is still one of my favorites as it symbolizes the beginning of a great working relationship with the magazine but also the subject, Registered Dietician Tiffani Bachus. The shoot was done at her house where I set up a mobile studio to photograph the cover as well as the interior workout circuit. I recall being nervous as it was my first big assignment with the magazine and I wanted to make sure I covered every base I possibly could. I probably overshot by a few hundred frames – but I left the shoot feeling confident we achieved something strong. Since that issue came out in February of 2011 I have had the ability to collaborate with Tiffani on numerous editorial projects as well as co-emceeing an event together in 2015.

Several of the covers our team had the chance to work on even went on to win some awards including the cover shoot we did with NFL cornerback Jamell Fleming and dancer and personal trainer Michelle Leigh Mozek.

For the July 2012 issue I woke up at about 4 in the morning after working till midnight the day before to meet with Danielle Pascente to photograph the magazine’s runner’s issue at sunrise.

For the May of 2014 issue I had the privilege of working with professional golfer and model Blair O’Neal in which we got to work at one of the most beautiful country clubs in the state.

Later that year in 2014 we got to launch the first ever Max Sports & Fitness Magazine fitness swimsuit issue which we have continued doing annually since.

In the September 2013 issue we got to work with fitness talent Marcus Johnson on an MMA spread photographing in a gym that was so hot inside that our lights began to misfire towards the end of the shoot.

For the October 2014 cover I had the opportunity to work with military veteran and amputee Derek Weida.

In the July of 2013 we hung fitness talent Deborah Goodman upside down for a rock climber inspired photo shoot.

In February of 2014 issue I got to gather together several cover models I had worked with previously for a large group shoot. These included Michelle Leigh Mozek, Kasie Rae, Tiffani Bachus, Gyda Loveres, Shandi Hudson and Morgan Tran.

The list of memories and fun projects goes on an on. There were projects that went splendidly and projects that drove us crazy with anger and disappointment. We had talents who surprised us so much we put them on a cover as soon as we could. We had other talents who were so rude they were yanked from their features before they even know they had them. We got to have long lead times planning certain features and short turn around times to scramble and put something creative together.

But the most important element of my experience in working with Max was the relationships that were formed.

The truth is – having tenure of that length can be rare in the publishing industry. Art Directors or photo editors change jobs, the magazine decides to go a different direction, the publishers decide to spread the work around. However we’ve been truly fortunate to earn a relationship that yielded us all the projects we’ve received.

For all 45 covers and all the interiors features I had the opportunity to work with Editor in Chief and Creative Director LaRue Gillespie. I truly could not have been blessed with a better client. The type of client who believes in myself and my team, challenges us, pushes us, supports us and collaborates with us. My sincerest thanks goes out to LaRue. I am ready for the next 200 working with you in any capacity!